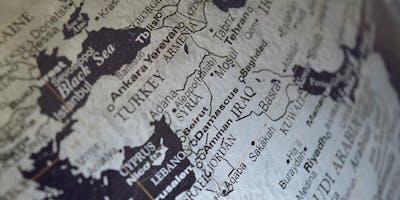 Britain and the Middle East: From the Arab Spring to Brexit

Join the Institute of Middle Eastern Studies as we hear Christian Turner CMG deliver a keynote address, as part of the Institute's formal launch.

The address will focus on the development of the UK’s interests in – and relations with –the countries of the Middle East and North Africa since the Arab Spring. It will last for 40-45 minutes followed by an opportunity for the audience to ask any questions. The address will be taking place in the Nash Theatre.

Christian’s address will be followed (20.00-21.30) by a wine reception in Chapters, King’s College London, Strand campus.

Christian was the Prime Minister’s International Affairs Adviser and Deputy National Security Adviser from April 2017 to July 2019. He previously served as the Director General for the Middle East and Africa, leading the UK organisation of the London Syria Conference in February 2016. From 2012 to 2015 he was British High Commissioner to Kenya; and from 2009 to 2012 he was Foreign and Commonwealth Office’s Director for the Middle East and North Africa.

Before joining government, he made television documentaries, following the completion of his PhD. He is married with 2 children.