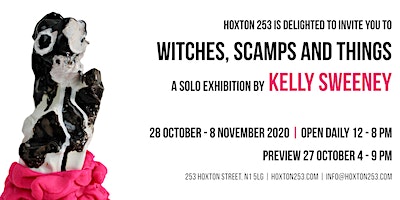 The gallery is hosting a programme of events alongside the show.

“I have always been seduced by the otherworldly, and the idea that we can exist as something Other.” Kelly Sweeney

For Sweeney it is the realm of schizophrenic psychic harlequins, ethereal Medusa-like goddesses and orchid-clown hybrids. Attracted by anamorphic forms, ritualistic paraphernalia and folkloric phenomena, she remains drawn to belief systems that subscribe to the transcendental.

The supernatural entities that manifest through sculpture and paint though inanimate, emit a life-force that permeates through the acrylic, glaze and glitter. The recent creation of two short films featuring the artist take us on an phantasmagorical trip where Sweeney becomes the painted, the sculpted, the fetish, the summoned, the conjured and the seer.

Witches, Scamps and Things is an invitation to an undisclosed domain, temporarily inhabited by the artist’s personal pantheon of beings. An archetypal ecosystem is evolving; what once hummed with florescence is now dirtied and soiled. And they revel in it.

HOXTON 253 present her first exhibition showcasing a multidisciplinary body of work comprising of film, sculpture and paintings. A text by curator and writer Linda Rocco will accompany the exhibition.

Kelly Sweeney is a multidisciplinary artist who gained a First class degree in Fine Art at Nottingham Trent University. After pursuing a career in art education, the artist critically re-visited her practice graduating from Chelsea School of Art with an MA in 2014. Sweeney has maintained a regular exhibition schedule that includes selected and invited group shows, awards and residencies. The artist has placed work amongst private collections in Europe, Asia, America, Canada and the UK.

Witches, Scamps and Things is Sweeney’s first solo exhibition since Transient at BSMT Space in 2016. The exhibition will showcase for the first time an Arts Council England supported body of work comprising film, ceramic sculpture and painting. The artist will be presenting a debut performance in response to the show as part of the wider exhibition programme.

Sweeney’s trilogy of films that feature the artist, premiered earlier this year to a sold-out screening at The Horse Hospital, London. Following her solo exhibition at the gallery, the artist will embark upon a residency with Inventory Platform where she will be creating a site-specific installation piece whilst exploring performative aspects of her practice. Sweeney lives and works in the city with a studio in East London.

The exhibition and associated programme is supported using public funding by the National Lottery through Arts Council England. 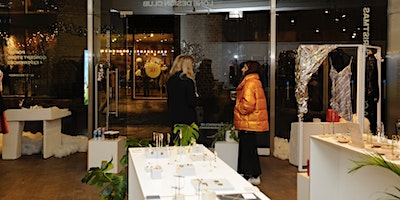 Celebrating the end of our November Concept Store, with drinks, designers + DJs. ... 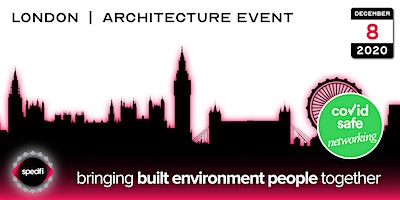 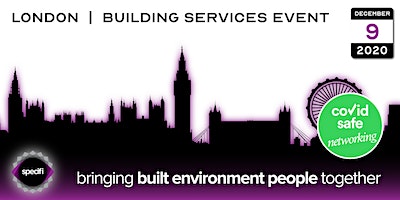 Our final chapter meeting of the year - always a good time.  As usual we will be welcoming some of the UK's top cyber security speakers and we thank Grant Thornton...