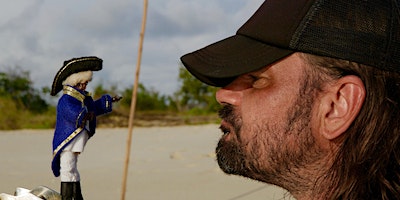 The final Menzies Screening of 2019/20 offers an exploration of the history and meaning of the iconic Southern Cross.

Marking the 250th anniversary of Cook's first Pacific voyage, this year's Menzies Screening series offers a chance to rethink some of the myths (and mythologising) about Australia's settler past. The final screening of the 19/20 series seeks to reorient our understandings of an emblematic icon of Australian identity and nationhood.

Commissioned as part of NITV's 'Moment in History' initiative, Warwick Thornton's We Don’t Need a Map (2017) traces Australia’s complex relationship to the Southern Cross. Ever since colonisation, this most famous constellation in the southern hemisphere has been claimed, appropriated and hotly-contested, but its meaning for Aboriginal people is deeply spiritual, and largely unknown by settler Australians. Thornton, director of Samson and Delilah and Sweet Country, and one of Australia’s leading film-makers, tackles this fiery subject head on in a bold, provocative and poetic essay-film.

This final Menzies Screening is timed to coincide with the Australian Studies in Britain and Ireland Symposium at KCL on May 15. Opening with a short contextual introduction by our resident film expert Dr Stephen Morgan, the screening will be followed by an informal drinks reception and open group discussion and the film and its contexts.

Please note: these events are free and open to all, but spaces are limited and advance booking is necessary.

Following on from explorations of Australia within a transnational context, and cinema’s role in perpetuating and solidifying settler colonial regimes in Australia and beyond, this year’s Menzies Screening series seeks to re-centre Indigenous narratives that are often marginalised within settler conceptions of Australian history.

The 2019/20 series marks the anniversary of the first voyage of Captain James Cook, whose arrival in the Pacific - aboard the HMS Endeavour - would prove fateful for many lands and many peoples. The particular nature of 250th celebrations in both Australia and New Zealand has caused a great deal of consternation, both from Indigenous groups, and within the broader population.

In an effort to revisit some of the myths about Cook’s ‘discovery’ of Australia, as well as other dominant, often problematic, versions of Australian history, this year’s screening series will present a selection of films that revise and re-frame approaches to Australia’s past. From reversals of the ‘discovery’ narrative, to Indigenous perspectives on Australian history, culture and society, this series places some of the core narratives of Australia’s settler colonial nationhood under the microscope.

Each session will begin with a short contextual introduction by our resident film expert Dr Stephen Morgan, and will be followed by an open group discussion. These screenings are free and open to all, but advance booking is necessary.

DR STEPHEN MORGAN is an academic and historian, based at Queen Mary University of London, who specialises in the cultural history of British and Australian cinema and the broader intersections of Empire and nation within settler colonial cinemas. As well as serving as the Screenings Coordinator for the Menzies Australia Institute, he is also the Co-Programmer of the London Australian Film Society & Festival.

The MENZIES AUSTRALIA INSTITUTE is the lead Australian research centre in Europe, and is part of the School of Global Affairs at King's College London. It seeks to deepen understanding of Australia in the United Kingdom through research, teaching and engagement.