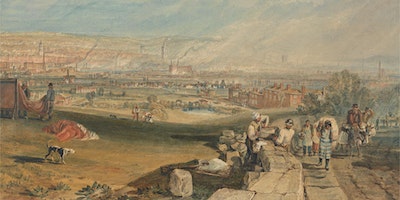 British Landscape Art of the Long Eighteenth Century: Reflections on a Cont

This talk will offer some personal reflections on the past fifty years of key developments in the study of British landscape art c.1740–1850. Its main focus will be on the radical transformation of this area of scholarship by the social art history of the 1970s and 1980s, and on how that project has subsequently been enriched by a series of productive engagements with other theoretical models, including those offered by psychoanalysis and post-colonialism. Whilst these changes are broadly consistent with the concurrent evolution of the discipline as a whole over roughly the same timespan, a distinctive feature of the past half-century of writing on historic British art has been the persistence of voices either unaffected by or overtly hostile to the so-called 'new art history', and to its impact on the analysis of landscape imagery in particular.

One of the world’s leading authorities on the history of British art, David Solkin taught at the Courtauld Institute of Art from 1986 until his retirement in 2016. In addition to numerous articles, he has published four important books: Richard Wilson: The Landscape of Reaction (Tate Gallery, 1982); Painting for Money: The Visual Arts and the Public Sphere in Eighteenth-Century England (Yale University Press; Paul Mellon Centre, 1993); Painting out of the Ordinary: Modernity and the Art of Everyday Life in Early Nineteenth-Century Britain (Yale University Press; Paul Mellon Centre, 2008); and Art in Britain 1660–1815 (Yale; Paul Mellon Centre, Pelican History of Art series, 2015) . David was the guest curator of the exhibition Art on The Line: The Royal Academy Exhibitions at Somerset House 1780–1836, which took place at The Courtauld Gallery in 2001–2002. He also edited and co-authored the collection of essays that accompanied the exhibition, for which he was awarded the inaugural William M.B. Berger Prize for British art history. Eight years later David curated Turner and the Masters, the hugely successful exhibition which opened at Tate Britain in the autumn of 2009, before going on to the Grand Palais in Paris and the Museo Nacional del Prado in Madrid.

After completing his Pelican survey, David turned his attention to an exhibition of Thomas Gainsborough’s portraits of the artist and his relations, entitled Gainsborough’s Family Album, which opened at London’s National Portrait Gallery in autumn 2018 before travelling on to the Princeton University Art Museum. His current projects include a catalogue of the late seventeenth- and early eighteenth-century portraits in the permanent collection of the Yale Center for British Art, and an exhibition of Henry Fuseli’s drawings of women, provisionally entitled Fuseli, Fantasy and Fetishism, scheduled for the Courtauld Gallery and the Pierpont Morgan Library in 2022–23.David Solkin was elected a Fellow of the British Academy in 2012.