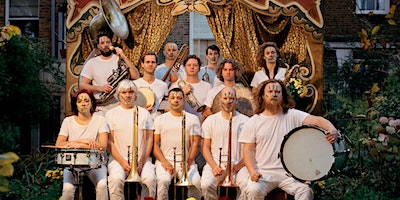 We love a party here on BBC Radio 3’s J to Z. Plus, we’re feeling festive, so we’ve asked brass band powerhouse, the Hackney Colliery Band and some VERY special guests to throw an exclusive FREE Christmas party, all in the heart of east London, at the cosy Moth Club.

To join us for an intimate evening of live music to be broadcast on BBC Radio 3 this December for a Christmas special, please RSVP via the registration tab.

This year marks the bands 10th anniversary, for which they released their critically acclaimed Collaborations: Vol 1. Over the last decade, the band have taken their lively genre-bending combination of brass, reeds, percussion and electronics, firmly establishing themselves as one of the most exciting live bands in the UK.

The East London collective have worked with a host of key artists from around the world, including the father of Ethio-jazz Mulatu Astatke, British jazz funk legend James Taylor, trombonist Dennis Rollins and Beninese singer-songwriter and Grammy Award-winner Angélique Kidjo.

They’ll be joined on the night by the mighty UK saxophonist Pete Wareham (Melt Yourself Down) and another very special guest for an exclusive set featuring tracks from their extensive back catalogue.

The evening will be hosted by broadcaster and vocalist, Jumoké Fashola, one of the presenters of BBC Radio 3's J to Z and the creator & host of the monthly spoken word & jazz series, ‘Jazz Verse Jukebox’ at Ronnie Scott’s Jazz Club

We'll open and close the night with uplifting tunes from one of London's finest selectors, and founder of On The Corner records: Pete On The Corner.

On the Corner has been endorsed by a broad church of tastemakers from Gilles Peterson and Dom Servini . The label's eclectic roster includes the critically acclaimed deep jazz outfit, Collocutor, producer Emanative, and star of the beatment underground Al Dobs Jr.

About J to Z

J to Z is BBC Radio 3's prime time jazz programme, broadcasting every Saturday evening from 17:00 - 18:30 GMT and celebrating the best in jazz - past present and future. The show is presented on rotation by Jumoké Fashola, Julian Joseph and Kevin Le Gendre. Tune in here.