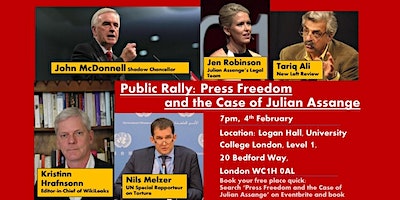 Press freedom and the case of Julian Assange

Public rally with the speakers discussing the issue of Press freedom and the case of Julian Assange.

The speakers will include:

John McDonnell - is member of the Labour Party, he has been Shadow Chancellor of the Exchequer in the Shadow Cabinet since 2015. He served as chair of the Socialist Campaign Group in Parliament and Labour Representation Committee, also chaired the Public Services Not Private Profit Group.

Jen Robinson - is an Australian human rights lawyer and barrister with Doughty Street Chambers in London. She is a member and adviser of Julian Assange's legal team since 2010. Her work often involves UN engagement advising governments, individuals and organizations on international law and human rights issues. She recently provided expert evidence on international law to the UN inquiry into the murder of journalist Jamal Khashoggi and acts for the family of murdered Maltese journalist, Daphne Caruana Galizia, seeking justice and accountability.

Nils Melzer - he has been serving as the United Nations Special Rapporteur on Torture and other Cruel, Inhuman or Degrading Treatment or Punishment. He is also a professor of international law at the University of Glasgow and holds the Human Rights Chair at the Geneva Academy of International Humanitarian Law and Human Rights in Switzerland. He has served for 12 years with the International Committee of the Red Cross as a Legal Adviser, Delegate and Deputy Head of Delegation in various zones of conflict and violence.

Kristinn Hrafnsson - editor-in-chief of WikiLeaks since 2018 and an Icelandic investigative journalist. He was named Icelandic journalist of the year three times, in 2004, 2007 and 2010 by Iceland’s National Union of Journalists; the only journalist ever to receive this award thrice.

Tariq Ali - he is a British political activist, writer, journalist, historian, filmmaker, and public intellectual. He has written more than two dozen books on world history and politics, and seven novels as well as scripts for the stage and screen. He is an editor of New Left Review.