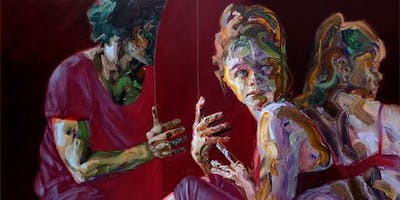 A discussion about Sara Shamma’s work and her current exhibition at King's, 'Sara Shamma: Modern Slavery'.

On 20 November, join artist Sara Shamma and curator Kathleen Soriano for a discussion about Shamma’s work and her current exhibition at King's, Sara Shamma: Modern Slavery.

After becoming aware of the display and sale of women and girls in slave markets in Syria and Iraq, Shamma was moved to explore and draw attention to the psychological impact of modern slavery. Sara Shamma: Modern Slavery draws attention to this pressing global issue through a new series of large-scale portraits.

The discussion will take place in Bush House Lecture Theatre 2 with a reception afterwards in the Arcade and an opportunity to see the exhibition.

Sara Shamma is one of Syria's most celebrated contemporary artists, whose works can be found in both public and private collections around the globe. Born in Damascus, Syria, to a Syrian father and Lebanese mother, she moved to London in 2016, where she currently lives and works, under the auspices of an Exceptional Talent Visa. She has been the recipient of various international art awards and was a prizewinner in the 2004 BP Portrait Award at the National Portrait Gallery, London; she became the United Nations World Food programmes 'Celebrity Partner' in 2010.

Kathleen Soriano is an independent curator, art historian and broadcaster, and has worked in museums and galleries for over 30 years. In 1989 Soriano joined the National Portrait Gallery as Director of Exhibitions & Collections and then moved to Australia to take up roles at the South Bank Centre and Art Gallery of New South Wales in 2004. She became Director of the independent art gallery Compton Verney, Warwickshire in 2006 and from 2009-14 was Artistic Director of the Royal Academy of Arts, London. Soriano is Chair of the Board of Trustees of the Liverpool Biennial, a specialist advisor for the National Trust and a member of the Women Leaders in Museums Network in the UK. She has lectured and written extensively on the visual arts and her broadcast activities include the six series of Portrait/Landscape Artist of the Year for SkyArts.

Sara Shamma: Modern Slavery is a collaboration between the Institute of Psychiatry, Psychology & Neuroscience (IoPPN) at King’s College London and artist Sara Shamma as part of King’s Artists. It is supported by the King’s Sanctuary Programme and by the university’s Culture team.