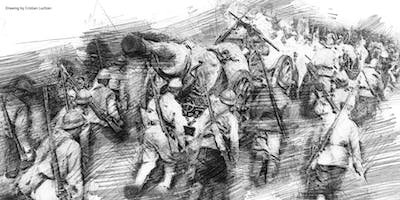 The V.V. Tilea Lecture: What Is ‘National’ about the National Day? Romania between Historical Context and Political Project. Talk by Radu Cinpoeș.

The second talk in the series will be given by Dr Radu Cinpoeș of Kingston University, who revisits the 1st of December 1918.

The date points to the aftermath of WWI and to the incorporation of Transylvania, Bessarabia and Bukovina into the territory of the Romanian state. Its symbolical strength lies in the notion of the union of the Romanian national community into a single state. This landmark in the Romanian history is an important pretext for festivity. It has also provided ample opportunities for gratuitous nationalism and vacuous discourse.

The purpose of this talk is to steer away from the traps of a mythologised history articulated in a nationalistic key, and to use the event as a pretext for a critical evaluation of the historical context in which the territorial unification occurred and to assess what the Romanian political project ought to be for the future. It looks back at the protagonists of the unification in 1918 – the winners, the losers and the forgotten and considers from there the kind of values that could inform the future of the Romanian state. (Dr Radu Cinpoeș)

Radu Cinpoeș is an Associate Professor in Politics, Human Rights and International Relations, and the Head of the Department of Politics, International Relations and Human Rights at the Kingston University. He completed his PhD at Kingston University in 2006 and has taught at Westminster University, as well as Kingston University. Previously, he completed his undergraduate and postgraduate studies in literature and he taught in the Department of Comparative Literature at the University of Iasi, Romania. He has published on nationalism, radical right, political participation and on the politics of intolerance, focusing in particular post-communist Central and Eastern Europe. He has developed and taught on a range of modules concerned with identity politics and human rights.

Viorel Virgil Tilea (1896, Sibiu - 1972, London), writer, politician and diplomat, was, between 1938-1940, the first Head of the Romanian Legation in London who took residence in 1 Belgrave Square. He attended the Paris Peace Conference in 1919-1920, which marked the international recognition of Greater Romania. Between 1919 and 1920, he was attached to the Romanian Legation in London, and between 1938 and 1940 he was Extraordinary and Minister Plenipotentiary to Great Britain. After the instauration of General Ion Antonescu’s dictatorship, he refused to return to the country, choosing to remain in England. In London Tilea founded, in 1940, the Romanian National Committee, and in 1941 the Free Romanian Movement, becoming one of the most active personalities of the Romanian exile. He was awarded the title of Commander of the Most Excellent Order of the British Empire (CBE).