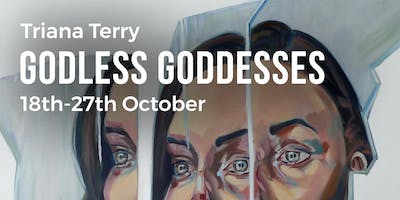 It seems inevitable that every woman, at some stage in her life, feels trapped by a particular situation.   The vulnerability that accompanies this state, along with the process and transition to feeling strong again, is a phenomena Triana has set out to capture through this series of paintings. Having suffered a traumatic event in her own life in her journey of recovery herself she is driven to display the emotions she sees within them.

In her training as an actor she learned how to study a fictitious character and bring it to life through acting.  This exhibition is a reverse of that.  She has studied real life women and their traumatic experiences and used that to create a series of fictional characters. She wants to show how these women coped between the blindness and realisation of their torment.

The study of this subject matter has lead her to meet a wide array of woman who have experienced pain, trauma and recovery.  She has listened to their stories and through painting their portraits Triana has studied the emotional (echos) etched upon their faces and the (compassion) shining through their eyes.

Through this process Triana began to recognise a common voice, a familiar camaraderie and a unifying strength.  She soon began to realise that one woman’s victory is a victory for us all.